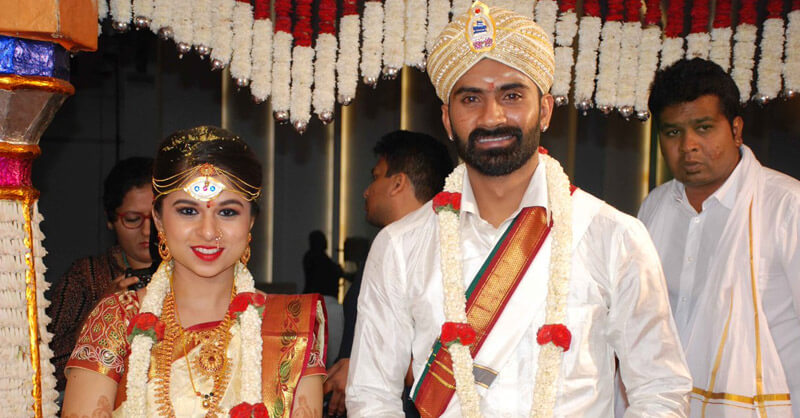 The people of Karnataka celebrate their weddings in a simple manner. The rituals are based on tradition and culture rather than [pomp and show. Typically they are two-day affairsand have a lot in common with the ways in which weddings are celebrated in Andhra and Maharashtra.

Some of the rituals that take place in a Kannada wedding are briefly described in the following paragraphs.

Nishchay Tambulam:
This is the name given to the official engagement ceremony that takes place prior to the wedding. The bride’s parents visit the groom’s house with gifts (coconuts, sweets, fruits) and clothes for the groom. The date of the marriage is officially decided by the priest in consultation with the elders of the family and announced during this ritual.

Naandi:
This is the ritual performed a few days before the wedding ceremony. This puja is done so that the wedding ceremony goes off without any hitches. It is in this ritual that the fiest wedding card is offered at the feet of God to remove all obstacles. The function is also marked by the ritual of filling a copper pot with holy water and placing a coconut on top. This is supposed to simulate the ‘nectar of life’.

DevKarya:
This ritual is performed as the groom leaves the house for the wedding. He visits all the temples in the neighborhood to seek the blessings of the deities. All the things that are to be used for the wedding are placed at the feet of Lord Ganesha to ward of all evils at the beginning.

Mandap puja is one in which the puja blesses and purifies the mandap in which the wedding is about to take place.

Wedding Attires of the Groom and Bride

The groom’s wedding dress is a ‘veshti’ or dhoti worn in the traditional way that South Indians do. During the wedding, the groom wears the tradition angavastram that covers his upper torso. He also wears a headgear called the ‘pitambar’. It is usually orange or white in colour. The groom is also made to carry a stick which is blessed by a pundit in the temple on the day before the wedding.

The bride’s attire is ornamental and she wears the traditional nine-yard Naavari saree for the ritual. She is made to wear green colored bangles for the wedding like the Maharashtrian bride. She also wears many traditional jewels like the jhumkas in the ears, necklaces, and kamarbandh made of gold. Her hair is usually plaited and decorated with flowers.

Okhli is a function conducted after the wedding function and consists of some games played between members of the two families and the newly wedded couple to break the ice and become familiar.

Vidaai is the emotional goodbye that the bride did to her family as she proceeds to her husband’s house. The parents send her off with basic things that are required for starting an establishment.

Griha Pravesh is the traditional welcome that the bride is given by her in laws to their house. She enters the house by kicking a pot filled with rice with her right foot ro indicate increased prosperity and wealth.