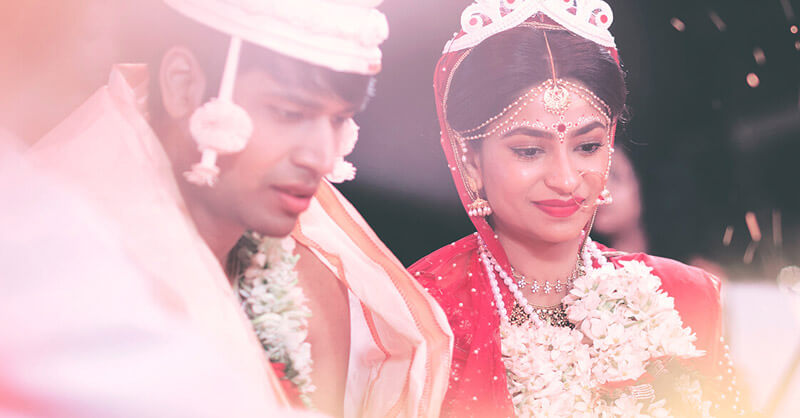 A Bengali wedding is a colorful one which is filled many elaborate rituals that are spread over 2 or 3 whole days. The weddings are a celebration of colors and beauty and the rituals have a deep traditional meaning to them. Described below are a few Bengali wedding rituals.

Pre-wedding ceremonies
Listed below are a few ceremonies that are celebrated before a Bengali wedding.

PathiPotro/Paka Katha
This is when the elders of the bride’s and the groom’s families meet together to decide all aspects about how the wedding is going to be conducted.

Aiburobhat
This ritual takes place on the evening previous to the wedding. The bride is showered with gifts from her close relatives and friends and is treated to the last meal as a spinster. The same rype of ritual also takes place in the groom’s house.

Sankha Porano
The bride is made to wear the traditional bangle made from the conch shells and red foloured bangles made of corals on the day prior to the wedding.

Jol Sowa
This ritual takes place in the morning of the wedding. The bride is accompanied by her mother and a few other married women in the family. They all walk down to the nearest pond to fill a brass pitcher with water. This water would be later used to bathe the groom.

Dodhi Mangal
This ceremony features the feeding of both the bride and the groom being fed with a misturebmad of bananas, sweet curds, rice flakes, etc., before sunrise. The nest meal of the day would only be when all the other wedding rituals have been completed.

Birddhi Puja
The fathers of the bride and groom perform this ritual in their respective houses to appease the spirits of the departed souls in the family.

Gaye Holud and Tattwa
A fresh paste made of turmeric and mustard oil is applied on the groom’s body before the traditional bath by the married women relatives. After the bath, the remainder of the paste along with the trousseau is sent to the bride’s house where the whole procedure is repeated. After this the bride starts to get ready for the wedding.

The Wedding Attire for the Bengali Bride and Groom

Groom’s Attire
The groom is dressed in a Kurta and dhoti. The material may be cotton, silk, or tussar. He is decorated with dots of sandal paste on his forehead. He wears a conical headdress called the Topor. This is usually made of cork. He later changes into a two-piece dress called the Jor. He also carries a rounded brass object called the Darpan at all times.

Bride’s Attire
The Bengali bride wears a heavily brocaded Banarsi sari in red colour. It is dreped on her in the traditional ‘aathpoure’ style. She wears a veil that covers her head.  She is made to wear traditional jewellery. She wears headgear called Mukut and her forehead is decorated with dots of sandalwood and kumkum. The Bengali bride carries a wooden container with ornate designs and filled tithsindoor and a one-rupee coin in it. This is called the GachhKouto. She also carries the KajalLata which is metallic container containing the paste of Kohl.