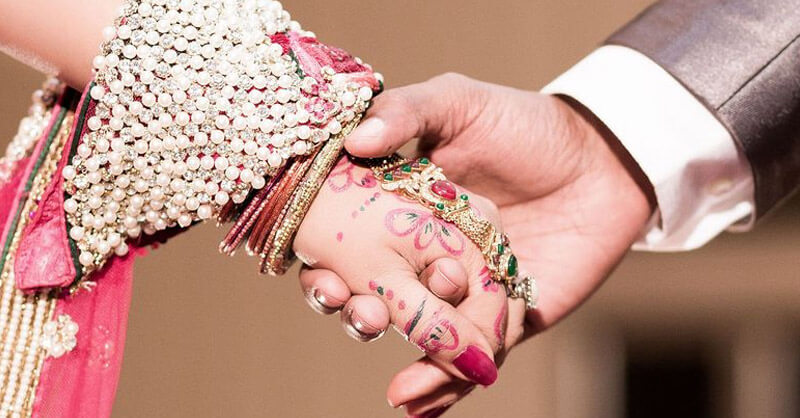 In Muslim Culture weddings are known as Nikah. The Muslim bride and groom are supposed to perform various wedding rituals pre and post marriage.

Ishtikhara Ritual:  This is the first and most important ritual in Muslim culture in which religious head of Muslim community come together to pray to Allah and seeks his consent before starting other wedding ceremonies; then mother of groom visits bride’s house for tying gold/silver coin on the upper hand of bride as a religious custom.

Mangani Ceremony: The tradition to exchange rings is known as Mangani or engagement. This ceremony is usually conducted at bride’s place where the family members from both the families are present.

Manjha Ceremony: In this ceremony bride is supposed to wear the yellow clothes; then family members and other relatives apply the paste  of turmeric on her face and body with a belief that this will enhance the beauty of bride . After this ceremony the bride is not supposed to leave her house till the wedding day.

Mehendi Ritual: All the females of the families participate and apply henna on their hands as a ritual and the Mehendi artist applies the henna design on the bride’s hand and feet. There is an ancient belief that darker the color of henna and the more lovable mother in law bride will have.

Sanchaq Ritual: The groom’s family sends wedding attire and ornaments for bride which she is supposed to wear on the wedding day.

Reception of Baraat: In this ritual of the Muslim wedding, the bride’s family welcomes the Baraat. The groom and other family members and relatives who are in procession of the Baraat are welcomed by the male members of the bride family then there is a tradition in which groom shares the sherbet with the brothers of Bride.

Nikah Ceremony: This is the most sacred wedding ceremony which is conducted in the presence of Maulvi and close family members of both the sides. As a tradition both bride and groom sits separately. The bride is given a pre decided amount of cash which is known as Mehr from groom’s and Maulvi asks the bride whether she is willing to marry the groom over the amount of Mehr. The same question is repeated three time and if bride agrees the same question is asked to the groom and both bride and groom gives their consent for wedding by saying ‘‘Qubul Hai”. This ceremony is popularly known as Ijab-e-Qubul and the Nikah ceremony is sanctioned by the Quazi.

The newlywed then takes the blessing from elder members of family and the celebration is followed by a grand dinner. Delicious cuisine is the specialty of Muslim wedding; they serve wide variety of traditional mughlai food. The men and women, usually sits separately for dinner. The bride and groom are then offered to sit together for the first time for reading the prayers. The couple is only allowed to look at each other through a mirror and then takes the blessing from bride’s family before the bride leaves for groom’s place. Bride’s family presents a copy of Quran as a religious symbol.

Like other weddings, Muslim weddings are unique in their own way.